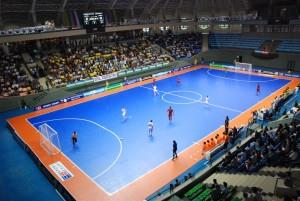 POSTED ON 6/27/11 | Doha, Qatar —The 2011 Asian Futsal Club Championships get underway here June 22 through July 1, and they’ll be playing on a futsal court provided by Sport Court, the official surface partner of the Asian Football Confederation.

“As the official flooring surface of our futsal championships since 2004, Sport Court has been an essential part of futsal development in Asia. We look forward to working with them again this year in Doha at the AFC Futsal Club Championship,” said a spokesman for the AFC.

“The AFC is the biggest and most important football organization in the world to officially endorse our surfaces for futsal. Sport Court is the only surface the AFC has ever approved for futsal. We are very happy to support their efforts to develop futsal throughout Asia,” said Ron Cerny, President and CEO of the Salt Lake City-based manufacturer, Connor Sport Court International.

The event features nine futsal club teams from Asia, starting with a playoff between Al Karkh Sport Club from Iraq and Harimau Rawa from Indonesia. The winner advances to Group A to join round robin play June 26th thru June 28th. Semifinals are played on June 30th and finals and consolation 3rd place matches are played on July 1st.

"In addition to conducting all its futsal championships on Sport Court athletic surfaces, the AFC donates one court each year to a selected Member Association working to develop futsal. Futsal is the version of indoor or limited space football, and is one of the world’s fastest growing sports. The AFC has endorsed Sport Court surfaces for both indoor and outdoor futsal.