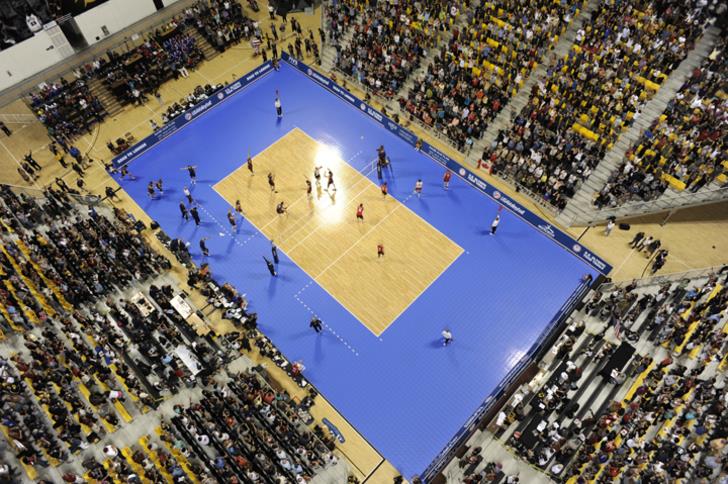 Sport Court has been the official playing surface of the USA Volleyball National Teams for 23 years. Our relationship with the National team has assisted in the development of the world's most popular volleyball surface.

LONG BEACH, Calif. (AP) The U.S. men's volleyball team is headed back to the Olympics.

The defending gold medalists punched their ticket to London on Saturday night by sweeping Canada (28-26, 25-18, 25-20) in the finals of the NORCECA Olympic qualification tournament at the Walter Pyramid.

Captain Clay Stanley had 15 points for the sixth-ranked United States team.
“Shoot, congrats to our team. We made it,” said Stanley, who was named Most Valuable Player for the event. “We got our ticket to London.”

The United States and Canada traded the lead frequently in the opening set. The U.S. had four chances at set point before Reid Priddy's spike finally ended it.

The first-set win seemed to energize the U.S., which went up 8-3 in the second on Stanley's ace followed by Russ Holmes' kill. Canada closed the gap to 10-8 on Adam Kaminski's ace, but the United States never allowed their opponents to get any closer and Priddy's ace stretched it to 19-12. Set point went to Stanley off the outside block.

Canada led the third set early, but the United States pulled ahead 11-10 on a triple block from Priddy, Holmes and Donald Suxho. Matt Anderson's unreturnable strike made it 18-13 and the United States cruised the rest of the way, winning it when Canada missed a return.

“I've never played a match this important on U.S. soil with as much significance and support,” Priddy said.

David Lee, selected best blocker of the tournament, and Matt Anderson each added 13 points for the United States.

The Canadians stunned Cuba earlier in the tournament, which included Mexico, Trinadad & Tobago, Costa Rica and the Dominican Republic.

The U.S. men have gone to seven straight Olympics. They went undefeated in the 2008 Beijing Games, upsetting top-ranked Brazil in the gold medal match.

The Canadians have not gone to the Olympics in men's volleyball since 1992. The team's best result was fourth in the 1984 Los Angeles Games.

It was Canada's lone chance to win a trip to London. The United States, based on its world ranking, would have gone on to a world qualification tournament in early June if the team did not advance out of the NORCECA tournament.

“I think we're doing some good things,” Canadian coach Glenn Hoag said. “But we need to work some more. You know, those little things we have to make better.”

Cuba and Puerto Rico, the highest-ranked NORCECA teams who have not qualified for London, will both get another chance at a world qualification event.

The United States has earned trips to the last four Olympics via the NORCECA qualification tournament. It is the first time the U.S. has hosted the event.