Philadelphia’s Heritage Park is Revitalized by Sport Court, Beyond Sport and ESPN 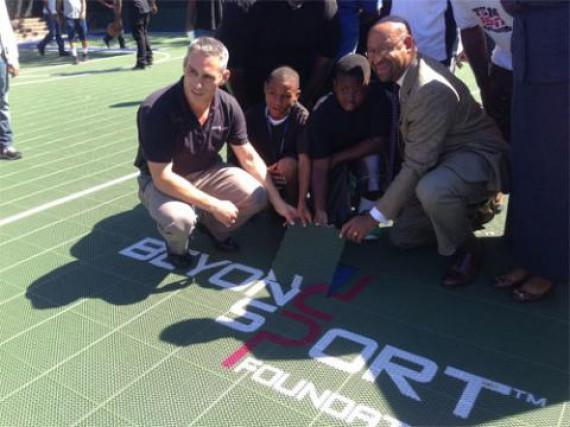 “Through this project we can leave something for the city that demonstrates not only the unique power of sport, but the power of partnerships, to trigger positive social change,” said Nick Keller, the Founder of Beyond Sport.

“At Sport Court we see many cases where providing safe, accessible places for sport can unite an entire community.” said Ron Cerny, CEO of Connor Sport Court International. “We are proud to team with Beyond Sports on this project to help this community and especially its youth so they can have a safe place to play basketball.”

The Beyond Sport project is just one of many contributions that Connor Sport Court International makes to create positive change through sport. This year its Connor Sports division, based in Chicago, partnered with Chicago’s Father Mike Pfleger and a number of NBA players to help organize the “Peace Games” designed to help stop the gang violence on Chicago’s South Side. Its Sport Court division domestically worked with the Nancy Leiberman Foundation to deliver outdoor basketball courts (Dream Courts) to communities in need and also worked internationally with NGOs, NGBs and The US. Department of State to deliver safe game courts to international communities in need including several in Afghanistan, Haiti and Tanzania.

“Our team is constantly working to identify new projects that can help communities by building safer and more attractive sports facilities in which the neighborhood can take pride” said Cerny. “In Philadelphia we are hoping this is just the beginning.”