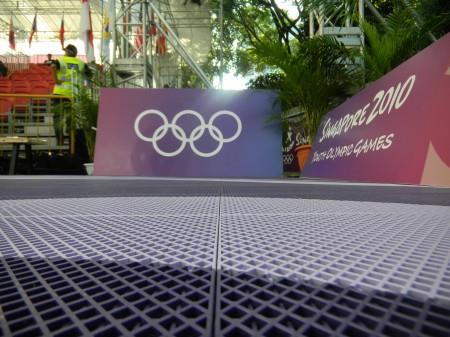 POSTED ON 8/14/12 | In an effort to dramatically enhance player safety for its 3x3 events, FIBA has selected industry leader Connor Sport Court International, manufacturer of Sport Court® playing surfaces, as the exclusive supplier for all of its basketball events through 2014, including the first-ever 3x3 World Tour and 3x3 World Cup, as well as the Youth World Championships.

The 3x3 World Tour consists of five Masters tournaments held in cities across the globe including Sao Paulo, Brazil; Vladivostok, Russia; New York, NY; Istanbul, Turkey; and Madrid, Spain. The 16 best teams from the Masters qualify for the 3x3 World Tour Final, which will be held in Miami, FL on September 22 and 23. FIBA has launched the 3x3 World Tour as part of its effort to have 3x3 basketball recognized as an official sport for the 2016 Summer Olympic Games in Rio.

“Sport Court is proud to be a FIBA partner since 1994 and we are pleased to supply our playing surfaces for all of FIBA’s 3x3 basketball events, which helps raise visibility for this growing sport,” stated Ron Cerny, President and CEO of Connor Sport Court International. “Using Sport Court’s patented flooring allows FIBA to create world class outdoor playing surfaces that can be set up quickly and easily in cities throughout the world. FIBA recognized the dangers of playing on asphalt and concrete, so they’ve chosen Sport Court surfaces to provide championship levels of player safety and performance.” The FIBA 3x3 World Championships for men and women will be held in Athens, Greece from August 23-26 and the Youth World Championships in Madrid, Spain from September 28-30. More than 25 countries will send nationally selected teams to this premiere 3x3 event.