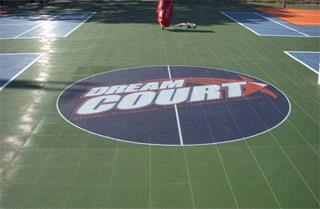 “We share the goals and ideals of this program and are delighted to provide our PowerGame™ surface, the safest playing surface in the world,” said Ron Cerny, President and CEO of Connor Sport Court International.

The DreamCourt is specially designed by Sport Court to include two playing surfaces that can be used for both basketball and tennis. The event was sponsored by Sport Court’s advocacy partners, the Nancy Lieberman Foundation, the Manifest Foundation and the United States Tennis Association (USTA).

Nancy Lieberman is the first woman coach of an NBA Development League team, the Texas Legends, the NBA’s Dallas Mavericks affiliate. In addition to her coaching, she is a commentator for ESPN and a motivational speaker. She also runs a series of basketball camps and clinics. Lieberman is a two-time Olympian, a former WNBA coach and player, and Author of her new book "Playbook for Success."

“Our vision for the Lieberman Foundation is to be the catalyst for the development of young girls and boys throughout the country by using basketball as a motivational tool,” Lieberman said. “Our mission is to provide a healthy physical, emotional and mental environment for young girls and boys to build their self-esteem and confidence so they will be able to make the right choices in the future.”

Spryte Loriano, Executive Director for the Manifest Foundation, said the DreamCourts are being planned through a partnership with Nancy Lieberman and the NBA for every city where there is an NBA National or D-League Team.

“Named after WorldVentures’ vision of helping others manifest a better life for themselves, the Manifest Foundation is dedicated to creating lasting, positive change in the world by impacting the lives of children,” said Loriano. “The Manifest Foundation believes that when youth advocate organizations with shared goals collaborate, their desired changes become reality with greater impact and efficiency, creating a ripple effect of positive change that reaches across borders and touches generations. We are proud to be part of the DreamCourt partnership.”

The USTA provided a $10,000 Facility Assistance Grant to Austin to help make this project happen.

“Our partnership with Sport Court helps provide an opportunity for the Boys and Girls Club of Austin to offer tennis to children at an earlier age,” said Virgil Christian, Director, Community Tennis Development, USTA. “Our 10 and Under Tennis initiative introduce modified equipment and courts that are tailored to a child’s size. This approach helps teach them to play more quickly and easily while having more fun in the process.”

The first “Dream Court” was dedicated last August in Dallas and was the first of a series of courts planned for about 30 U.S. cities as a joint project of the Nancy Lieberman Foundation, the Manifest Foundation and Sport Court.

The Utah-based manufacturer has subjected its tennis surfaces to rigid third-party tests to come up with the optimum surface for safety and playability. “It is immensely gratifying to see major organizations like the USTA join with Nancy Lieberman, and the Manifest Foundation to create such a positive program for youth,” said Sport Court’s Cerny.

The court was installed by Court Builders of Austin, a Sport Court-authorized dealer.