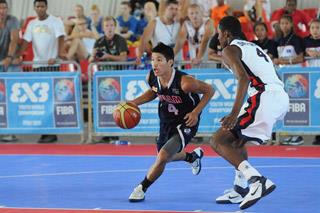 POSTED ON 9/9/11 | Rimini, Italy —Sport Court® has been chosen as the playing surface for the inaugural FIBA 3x3 Youth World Championship to be played September 9-11 in Italy. Sport Court's PowerGame™ outdoor surface will be featured at this prestigious international event that highlights 60 teams from across the globe battling head-to-head to be crowned Youth World Champions.

PowerGame was selected after extensive field observations by FIBA, recognizing Sport Court’s completion of over 100,000 projects since 1974. Sport Court has been a member of the FIBA Study Center since 1994 and recently received an award from FIBA—the world’s governing body for basketball—for its outstanding contribution to the sport of basketball. The PowerGame surface is specifically designed for outdoor use and backed by a 15-year warranty.

FIBA announced it would hold its first-ever 3x3 Youth World Championship after seeing the impressive progress that has been made over the past year in developing the format of the game, starting at the 2010 Youth Olympic Games in Singapore and culminating in the current World Championships with aspirations of bringing it to the Olympics by 2016.

With its national basketball federation celebrating its 90th anniversary, Italy will host the three-day tournament in the city of Rimini with competition for the top girls and boys teams in the world taking place simultaneously.

Andrew Gettig, International Vice President, said, "We are glad to see FIBA conducting its first ever 3x3 World Championships on Sport Court outdoor basketball courts. Sport Court is the world leader in safe, outdoor courts, and that is why FIBA has chosen our surface for this high-level event."

The roots of 3x3 basketball come from the city, and from the hard asphalt and concrete courts. FIBA has wisely seen that concrete and asphalt are good for building cities, but not for the bodies of high-performing athletes. Sport Court’s outdoor surfaces have been verified by independent third party testing to be the safest. For many countries basketball is primarily an outdoor sport, and those countries need safe outdoor surfaces for the safety and longevity of their athletes.