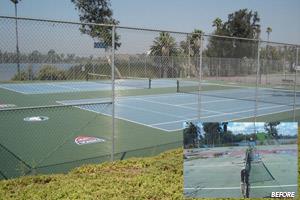 POSTED ON 8/22/11 | Corona, California —Two Sport Court® tennis courts will be revealed August 24, 2011, at a ribbon cutting ceremony at the U.S. Navy’s Naval Weapons Station Detachment at Seal Beach, California thanks to a contribution from the United States Tennis Association working in conjunction with Connor Sport Court International.

Sport Court, headquartered in Salt Lake City, is the “Official Modular Court” for the USTA and 10 and Under Tennis.

“We are pleased to join the USTA in bringing the highest quality recreation facilities to our service men and women at the Naval Weapons Station,” said Ron Cerny, CEO and President of Connor Sport Court International.

Installation of the Sport Court surface is being handled by Sport Court of Southern California, Dale Hendrickson, CEO and owner. “We will be cleaning up an old site and then providing two Sport Court PowerGame™ tennis courts totaling about 14,000 square feet,” said Hendrickson.

The contribution was arranged by the Community Tennis Department for the USTA.

“The USTA is delighted to honor and support our service members and their families,” said Virgil Christian, Director of Community Tennis Development.

In a letter, Under Secretary of the Navy Robert O. Work offered the Navy’s “sincere appreciation” to the United States Tennis Association.