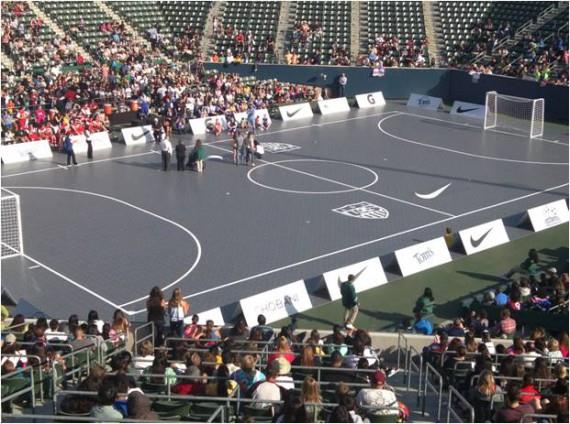 The sport of futsal is growing rapidly in the U.S., and U.S Soccer selected Sport Court to provide Sport Court futsal courts for its events and launch an affiliate club program to create safe and consistent playing surfaces across the US.

“We are very excited about our partnership with U.S. Soccer,” said Joel McCausland, Sales Director for Sport Court. “Over the years we have witnessed the important role a safe, consistent playing surface has in the development of a sport. Sport Court is excited to be the surface of futsal in the United States and help grow the sport.”

Earlier this year, the U.S. Soccer Federation mandated that its elite youth soccer programs build in at least two months of futsal play per year, and clubs all over the country are now implementing the game into their programs and seeking new places to play.

Under our agreement, clubs affiliated with U.S. Soccer are eligible for discounted pricing, and Sport Court also provides a rebate to the Federation for each court sold, to help support and grow the sport of futsal in the United States. Additionally, Sport Court is providing two custom branded Sport Court futsal courts measuring 120’x60’ to the federation for its Youth Futsal Invitational Events.

Sport Court has supported the sport of soccer for many years, striking its first relationship with U.S. Soccer over a decade ago. We entered into an agreement with the U.S. Soccer Foundation (the charitable arm of U.S. Soccer), about five years ago, and have since helped them build over 20 grant projects, with product donations from Sport Court and contributions from the Foundation. Those projects continue to be funded, and we expect more projects in 2014.