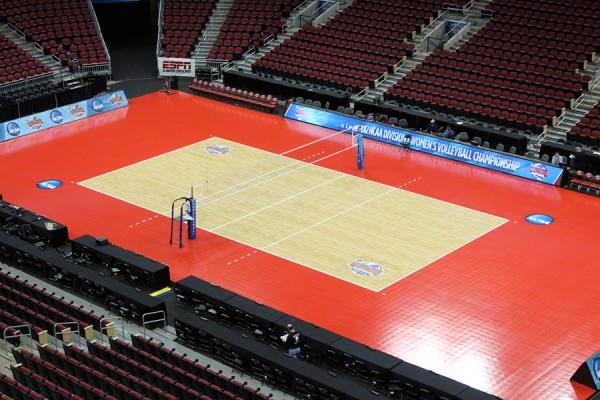 The 2012 NCAA Division I Women’s Volleyball Championships to be held December 13 and 15 at the KFC Yum! Center in Louisville, KY will be contested on courts from Connor Sport Court.

Sport Court is once again featured as the official playing surface of the Championships, as well as the Regionals held December 7 and 8 at Haas Pavilion in Berkeley, Calif.; CenturyLink Center Omaha in Omaha, Neb.; Gregory Gymnasium in Austin, Texas; and Mackey Arena in West Lafayette, Ind.

“The superior quality and safety of our surfaces is why Sport Court continues to be the choice of the NCAA Volleyball Championships,” said Ron Cerny, President and CEO of Connor Sport Court International. “In addition, the courts can be installed quickly and easily, and customized to meet any color or layout requirements.”

For 20 years, Sport Court has partnered with the NCAA to supply more than 50,000 square feet of performance flooring for all three divisions’ volleyball championships. Connor Sport Court has also been the exclusive provider of hardwood basketball courts for the NCAA Final Four® since 2005.