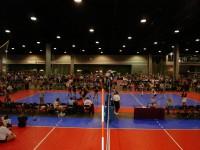 POSTED ON 6/23/11 | The 32nd Annual Girls’ Junior National Volleyball Championships will be played in Atlanta, Georgia from June 25 through July 4 on surfaces once again provided by Sport Court®.

Forty playing courts totaling 150,000 square feet are being provided by Sport Court for the 32nd annual event, which was formerly called the USA Junior Olympic Girls’ Volleyball Championships. Teams must qualify to compete in the national championships.

“We are happy to be celebrating our 22nd year as an official partner with USA Volleyball” said Ron Cerny, President and CEO of Connor Sport Court International, the Utah-based manufacturer of Sport Court volleyball courts. “Our experience with championship events through the years has greatly assisted in the development of market-leading sport surfaces”.

This year’s championships will be held in the Georgia World Congress Center. Forty regions of USA Volleyball are represented in this event. Each of the participating teams had to place in the top of the respective regional championship to qualify for this national championship.

“Because of Sport Court’s development of these high-performance surfaces, volleyball events like this can be played under a single roof,” said Cerny.

Before Sport Court partnered with USA Volleyball, an event like the USA Junior Olympic Girls Volleyball Championships would have required many different venues on many kinds of surfaces. Now a consistent series of playing surfaces can be put in place at a single site.

“It makes the games more exciting and the team spirit bonds the players, leading to greater interest and participation in the sport,” said Cerny.

Sport Court’s Response™ playing surface is a state-of-the-art engineered polymer surface, which has Lateral Forgiveness ™ for player safety while at the same time providing the resiliency needed in this fast-moving sport. Connor Sport Court engineers have constantly developed and improved this court system to make it the official choice for volleyball organizations the world over.