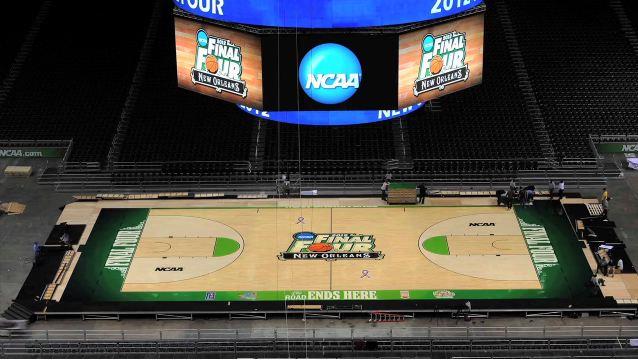 When the National Collegiate Athletic Association® basketball championships are played in the Mercedes Benz Superdome on March 31 and April 2, millions across the world will be watching the athletes play on courts that started taking shape last September in a tiny town on Michigan’s Upper Peninsula.

The sleek hardwood courts on which the championships will be played kickoff their traditional journey to the Final Four® on Saturday, March 17 with a fan rally at the 100 block of Witherspoon in Louisville.

A documentary team from CBS Television is filming the tour, from construction of the court in Amasa to Final Four play in New Orleans.

The championship court, which will be transported by UPS Freight, will begin its road trip on March 16 at UPS’s hub in Columbus, Ohio. From there it will travel on to Louisville, one of the host sites for the second and third rounds of the men’s tournament.

On March 19, the court will make a stop at the UPS Freight facility in Atlanta followed by Auburn University in Auburn, Ala., on March 20; the University of Southern Mississippi in Hattiesburg on March 21, and LSU in Baton Rouge on March 22 before arriving at its final destination in New Orleans on March 23. The events at the UPS facilities in Columbus and Atlanta will be exclusively for UPS employees, but all other court destinations will be open to the public.

UPS and Connor Sport Court have planned a wide range of entertaining events and activities at each stop, including photo opportunities with a replica of center court, a Final Four trivia game with collectible prizes and a shooting contest on a “backyard” basketball court provided by Sport Court®.

“It’s a pleasure to partner with the eminent UPS brand on our tour,” said Ron Cerny, President and CEO of Connor Sport Court. “We are the foremost experts in building sports surfaces, and they are the foremost experts in transportation and delivery of items large and small. It’s a great pairing.” The Connor Sport Court/UPS Final Four Floor Tour actually started last autumn in the town of Amasa, population 250, which is home to a complex of four buildings housing one of the manufacturing operations of Connor Sport Court International. Connor, founded in 1872, is the leading manufacturer of hardwood courts in the U.S.

Summer brings a tourist economy to the U.P., but the Connor plant is the largest full time employer in Iron County. “We draw 70 per cent of our 125 employees from the towns of Iron River and Crystal Falls,” says Conrad Stromberg, manager of the plant and a Connor employee for the past 23 years. Stromberg lives in Amasa, “But we have to go to Crystal Falls or Iron River to do our shopping.”

“We are very proud of the portable courts we build for the NCAA and the NBA teams,” said Stromberg, citing as an example the unique parquet hardwood portable floor the company built for the Boston Celtics. “Portable floors—such as those used in the Final Four—enable venues to quickly take them up and down. This means you can have basketball one night, hockey the next,” says Stromberg.

The NCAA Final Four courts for both men and women are manufactured from hard maple which Connor Sport Court purchased as rough lumber. Connor buys from about 60 different sawmills, most of them in Michigan and Wisconsin. Last September the rough lumber arrived at the Connor plant.

“First it is cut to a width size of 2 and ¼ inches,” said David G. Smith, production manager at Amasa. It is then planed and defects are cut out of the wood. After that, it runs through a side-matcher, which planes it down and cuts the tongue and groove on each side of the strip. It then goes to the end-matcher which makes a tongue and groove on the end of each strip. It is graded first, second and third according to Maple Floor Manufacturing Association (MFMA)

“The NCAA gets only first grade maple,” says Smith.

The courts then go into a separate building where it is “portabilized,” assembled into sections measuring 48 ¼ inches by 96 and 1/8 inches. The total size of each court, once assembled, 60’ x 120’, an area of 7,200 square feet.

One of the most critical elements is the subflooring, a patented Connor structure which goes under the maple surface and provides just the right amount of resiliency and shock absorption to assure good performance and player safety. Once each portable section is complete, it is placed in a stack of 12 under stringently controlled temperature and humidity conditions. .

A few weeks before the Final Four tournaments, the floor is assembled and inspected at the Amasa plant. The floor is then disassembled and sent to one of the company’s finishing facilities, in this case Ohio Floor Co., Apple Creek, Ohio, for the men’s’ Final Four Court. Connor Sport Court is also supplying the court for the 2012 Women’s Final Four which will take place April 1 and 2 at the Pepsi Center in Denver.

“The whole plant celebrated that designation,” says Stromberg. The plant utilizes sawdust to fire boilers and to heat and generate steam. Any remaining waste is made into “wood flour” which is used for composite decking. As a member of the Maple Flooring Manufacturing Association, Connor adheres to the strict grading and quality standards of that organization, Stromberg adds. Maple hardwood used in the courts is from a renewable resource, with the U.S. growing six times more hardwood than is harvested each year. “We’re very proud of our Amasa group, says Ron Cerny, President and CEO of Connor Sport Court. Connor Sport Court International is headquartered in Salt Lake City, Utah and its hardwood surface sales offices are headed by CSCI Vice President and General Manager Jon Isaacs in Arlington Heights, Illinois.